Ca. 1880'S THE CHAMBERSBURG BEFORE THE ITALIAN IMMIGRATION 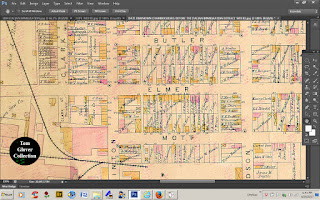 It took me the better part of 2 hours to stitch this incredible graphic together from a very rare and quite huge and VERY DELICATE wall map that has been in my collection for a long time. There is no date on the map but I place it in the 1880 before the influx of Italian immigrants began to move into the area. Over the years, I have written much about the Chambersburg of the post Civil War 1860's when it was basically corn fields and apple orchards and other vestiges of a farming area.As can be seen by the little article below from May, 1884, the number coming from the old country was growing rapidly. As the article also says, "A few years ago there was hardly an Italian in Trenton outside the manipulators of the hand organ.." 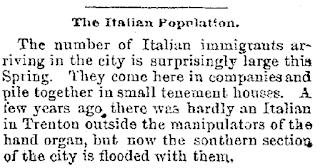 Posted by Tom Glover at 6:53 PM No comments: Links to this post 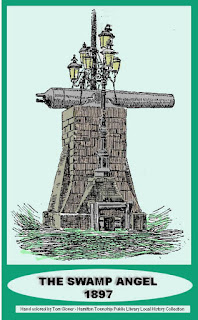 My friends from Camp Olden Civil War Round Table will enjoy these graphics that how an R.C. Maxwell photograph showing the intersection of Clinton and Lincoln Avenue on a bright sunny day, That young fellow walking in the photo could be a 57 year old Civil War veteran walking only a few feet away to the historic Swamp Angel which was on Perry, Clinton and Lincoln Avenue intersection.
The original of that Maxwell photo was "cloudy" and a bit dark and easily enhanced. I hand colored the Swamp Angel from an 1897 engraving. Truly a beautiful relic of the war between the states.
Posted by Tom Glover at 8:31 PM No comments: Links to this post 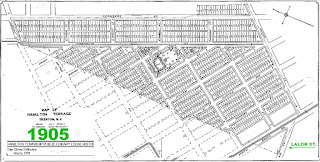 Years ago I created a "NEIGHBORHOOD DEVELOPMENT folder in the Hamilton Township Public Library digital Local History Database. Here is a plat map of Hamilton Terrace which is in the Chambers St, Howell, William Street area and was laid out in 1913. The newspaper article was extracted from a 1912 ad advertising homes in that area. FASCINATING!
Posted by Tom Glover at 11:36 AM No comments: Links to this post

1966: A BREATHTAKING VIEW OF "JUNIOR 4;" AKA GRACE DUNN MIDDLE SCHOOL 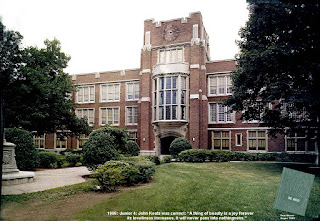 We should pay full attention to these BEAUTIFUL examples of QUALITY architecture and do all in our power to see that they do not deteriorate and require replacement with glass encrusted replacements. Every time a pass by my original Hamilton High School on So. Clinton Avenue, I realize the quality that was the hallmark of the generation that built these beautiful red brick neighborhood schools. The shameful neglect  of Trenton Central High School, Trenton's most beautiful high school should never have happened.  PREVENTIVE maintenance should have been the order of the day instead of "kicking the can down the road" until the mold, mildew, rust and lack of attention resulted in its demise.
Posted by Tom Glover at 10:58 AM 1 comment: Links to this post 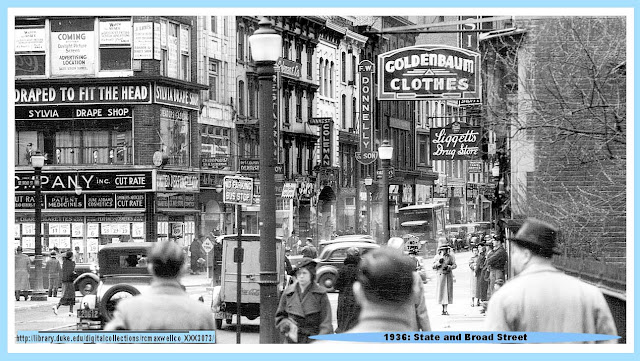 That sign  on the right was the shop of Mr. Leonard Goldenbaum who was the photographer who took the wedding photos of my dear Judy and me back in 1954. "Uncle Leonard" was indeed Judy's uncle and an expert in photography
Posted by Tom Glover at 8:09 AM 1 comment: Links to this post

These will be the final R.C. Maxwell graphics that I will be posting on Facebook, I am going to post these R.C. Maxwell Trenton area photos exclusively here on the Hamilton Township Public Library Local History Website, abiding by the procedure set by the Duke Archive Librarian. Back when I requested the proper way to display their credits in order to obey the copyright rules of "Fair Use" as told to me by the Librarian, who indicated on his return email to me that there was a definite "uptick" in downloads from a number of other local sources, and indeed there was. Due to Facebook graphic size limits does not allow for large over 100 dots per inch graphics.  Using software that can enhance these exquisite photos and allow them to be displayed in screen filling size provides future generations of historians and scholars to get dramatic visual views of the way we lived in the area in years gone by. The aforementioned "uptick" as imparted to me in that email resulted in at least two of Maxwell photos (and probably more) that were posted with no accreditation at all and I want to be sure that I abide by the "Fair Use" doctrine.. I am in the process of trying to find any and all of my few very early posts so they can be properly credited.
Posted by Tom Glover at 6:42 PM No comments: Links to this post

1941: TAKE A WALK TO PETE LORENZO'S STEAK HOUSE ON A BRIGHT AND SUNNY SEPTEMBER DAY 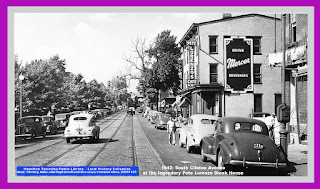 These R.C. Maxwell photos are showing up in proliferation on Facebook and most of them are dark and in need of tweaking in order to make a sunshiny day bright,and a cold and gloomy day dark. Here's still another R.C. Maxwell Hartman Collection which is being posted as I was instructed to da by Mr. Joshua Wright of the Hartman Archives with the link and the library "xxx" call number inserted on the bottom of the photo.  The incredible clarity of the photo is typical of the R.C. Maxwell cameraman who has created a pictorial history of both Trenton and Atlantic City along with a few Lawrence, Hamilton and Hightstown photos as they were in years past. My guess is that the Maxwell camera man used an old "Graphlex" or perhaps a German "Rolliflex" camera in order to get such a detailed pristin photograph.

As to the photo's subject which in this case is the legendary Pete Lorenzo;s, many a political meeting was held over lunch at Pete's as were many industrial and commercial discussions lunches and dinners. Unfortunately Pete's is no longer with us, having been closed and dismantled many years ago.
Posted by Tom Glover at 10:45 AM No comments: Links to this post

1936: A SPLENDID VIEW OF PERRY STREET AT NO..WARREN 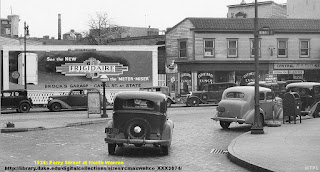 What an exciting photo! Herewith an extract from the Duke Library R.C. Maxwell Collection showing the view just in front of St. Mary's Cathedral, looking north. If you look very closely, you will see the Blakely Laundry smokestack in the distance. Note also the "Frigidaire" ad for the coin operated appliance that was a common site in the more affluent areas during the "Great Depression."

Posted by Tom Glover at 9:44 AM No comments: Links to this post

1897: TRENTON LOOKING SOUTH FROM THE SPIRE AT ST. MARY'S CATHEDRAL

In 1897, the Daily State Gazette published a 16 page full size supplement entitled "189b INDUSTRIAL EDITION," and it is now well preserved in the Hamilton Township Public Library's Local History Collection, and what a treasure. For years I have been opining about the number of libraries who fell for the "microfilm" conversion of their huge volumes and sold millions of reels to libraries who had no idea at the time that there would be such a thing as digital duplication! In return for ordering those space saving microfilm reels that fit in a small cabinet, the libraries gained much needed space, but time has proven that they should have been preserved. Modern technology allows me to duplicate these incredibly beautiful engravings, photo graphs and articles in as good and many times better than the original. Thankfully our huge 100-plus year collection of Trenton newspapers are taking up half of my local history workshop, but I get a warm and fuzzy feeling every time I think of the treasures I saved for posterity!
Posted by Tom Glover at 10:37 PM No comments: Links to this post 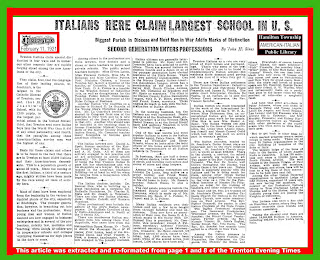 I spent over an hour piecing this graphic together in order to allow for comfortable reading. The original was on the front page of the Trenton Evening Times and on column spanned the entire page from top to bottom with a continuation on page 4 which had the balance of the column spread out over multiple columns. To my Italian-American visitors, you will be proud to read of the remarkable accomplishments your ancestors made when the came to America for a better life. This graphic is quite apropos as we confront differing views on immigration in this 21st century. FASCINATING article and quite informative.
Posted by Tom Glover at 10:11 PM No comments: Links to this post