1922: A CONCERTED EFFORT TO LURE SHOPPERS TO SOUTH WARREN ST. 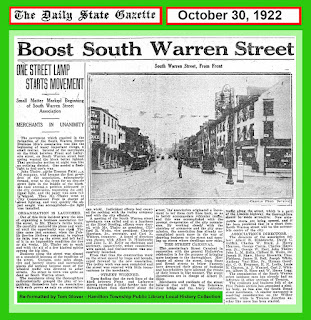 Here's an interesting composition that I put together recalling an area which was always of interest to me. Most of my trips to downtown (uptown) Trenton were when I was a young boy and Mom Glover would take me there during her visits to pay the Public Service bill and at the same time visit the many stores in the State and Broad area. (Nevius Voorhees, Swern's, Gimbels, Kresge's, Woolworth's, W.T. Grant and countless other center city venues. It wasn't until I got my driving license that I got to explore South Warren Street where I often visited Penn Jersey and So. Warren Street when we went "cruising" an a Thursday night when the stores were open until 9. I am a firm believer that Trenton will once again become a more viable city and already we are seeing the Phoenix rise from the ashes with Mr. Eric Maywar's classic book shop, a barber shop and I am sure more to come.
Posted by Tom Glover at 10:40 AM No comments: Links to this post 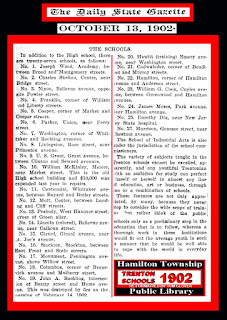 What a wonderful job I have as the local Hamilton Township Public Library historian-Archivist! I have been perusing my "SCHOOLS-HAMILTON," SCHOOLS-TRENTON, "SCHOOLS- MISCELLANEOUS" folders and am pleasantly surprised to find that the files in these folders is, and has been slowly growing. Assuming that these digital history folders survive the test of time after Tom Glover moves on the the great beyond, future generations will be very grateful to Hamilton Township and their public library for preserving these historic documents for the future use of students and those interested in the local history of Hamilton, Trenton and the outlying area. Except for the wonderful Trenton Historical Society, it would seem that none of our local libraries seem to be interested in digital preservation. If I am in error on this observation, please let me know.
Posted by Tom Glover at 11:31 AM 1 comment: Links to this post 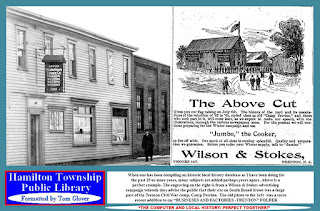 This graphic is for the "hard core" historian who loves the heritage of the Trenton of yesteryear, and also loves local Civil War memories. These two graphics come together after being separated by a number of years. The graphic on the right was in my "BUSINESSES-TRENTON" folder for many years (1983). Then along came the photo on the right just today to join in a dual graphic of historic interest. Fascinating!
Posted by Tom Glover at 8:30 PM 1 comment: Links to this post

1992: A DEFINIITIVE ARTICLE ON HAMILTON'S CAMP OLDEN AND THE MEMORIAL PARK 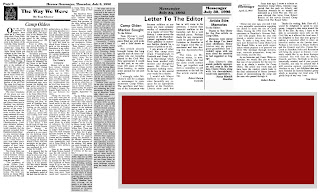 I posted this graphic on Facebook, but it is not legible due to the large size and length of the articles and accompanying letters to the editor. limited. Had I not uncovered the old Trenton newspaper article relating to the Lawton brothers who had a farm in the Hamilton Avenue in the area of today's Kuser School, I would never have been able to come up with such a splendid example of local Civil War history.
Posted by Tom Glover at 3:58 PM 1 comment: Links to this post

LABELS CAMP OLDEN-TOM GLOVER 1992 ARTICLE "The Way We Were"

2016: THE HISTORICAL SOCIETY OF HAMILTON IS A BLAZING SUCCESS!

We have found the secret of a successful local historical society! After assuming the leadership of the Historical Society of Hamilton Township, a few years ago, Dr. Jim Federici, Ms Lois Majarowitz and I have had our suspicions confirmed as to how to increase interest in our programming. we find that our historic poor attendance centered around former officers program choices. (Those former officers include Tom Glover and Dr. Jim Federici.) We found that the average citizen would really love to hear and see programs that were relevant to them personally: BROAD STREET PARK, WHITE CITY, NJ. STATE FAIR, KUSER FAMILY, CHAMBERSBURG, and on and on. These programs have proved to be successful with large crowds attending as opposed to programs such as "open hearth cooking," "tile making in Trenton," "Flemington NJ," and other bland and boring subjects of interest to only a select few. The attendance began to decline during my time as president when we were lucky if 15 people showed up for our meetings, most of whom were senior citizens. Now with what I have termed our "New Departure," we are experiencing incredible attendance numbers of attendees who are avidly interested in RELEVANT local history.

The photo is from last evening's BROAD STREET PARK - WHITE CITY" on screen presentation. It was taken before the program began at 7 P.M. The final count was 59 or 60 attendees, all of whom enthusiastically asked questions or contributed to our on screen photos and articles. Former Sheriff Gil Lugossy and local Broad Street Park Historian Jim Colello loaned us their historical expertise on the neighborhood and the program was a huge success!.
Our future programs will include material of interest to Trenton and outlying areas for those citizens who are interested in Trenton as it was in earlier years.