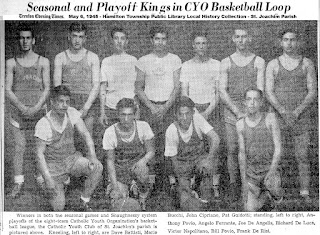 Here's the 1945 St. Joachim basketball team which has earned a spot in the Hamilton LIbrary's Local History "ST. JOACHIM" and "CHAMBERSBURG" folder. Quite a number of prominent Chambersburg names here.
Posted by Tom Glover at 10:59 AM No comments: 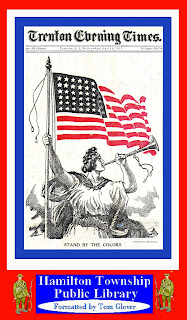 February 3, 1917 President Wilson addressed Congress to announce that diplomatic relations with Germany were severed. In a Special Session of Congress held on April 2, 1917, he delivered a 'War Message.' Four days later on April 6, 1917, The Trenton Evening Times front page headline read, "WAR DECLARED, WILSON SIGNING THE RESOLUTION AT 1:13; ALL GERMAN SHIPS HERE SEIZED BY ARMED U.S. FORCES" Congress overwhelmingly passed that War Resolution which brought the United States into the Great War. I put this graphic together and embellished it with a figure of a WWI "Doughboys" to accompany Lady Liberty as she waved Old Glory.
Posted by Tom Glover at 10:45 AM No comments: 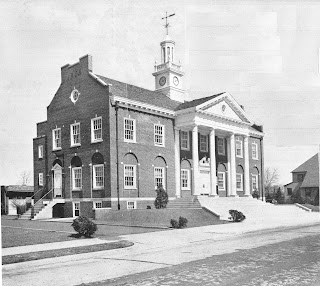 As I enter my 23rd year as the Hamilton Local History archivist, you probably noticed that this site has been lacking in new posts over the past year or so. Let me explain. After years of coping with space problems, Interim Director Scott Chianese gave the green light to our ever talented Harry Meeks to construct shelving to accommodate the ever growing inventory of yet-to-be catalogued and digitized historical material. My workshop was overflowing with LARGE full cardboard boxes of donations, boxes from my personal collection, and other space stealing objects. It was a shameful scene that one would see if a grenade were lopped into the room. Now all of that has changed and thanks to those aforementioned problem solvers, I am able to breathe again and resume this website which will soon realize 1 million visits. Thank you for your indulgence and as we move forward, let me her from you via the "Comments" feature of this site.
Posted by Tom Glover at 9:22 AM No comments:

1917: SPRINGTIME COMES TO MERCER COUNTY AND THE DELWARE VALLEY 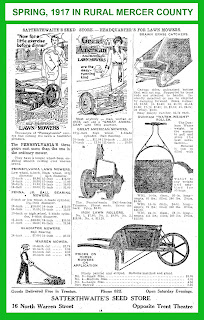 This delightful catalog page from the Trenton Evening Times of April 11, 1917 brings back many familiar memories of tools that I remember very well from my younger years. The push mower with the steel wheels with horizontal treads, the very common high sided wooden wheel barrow, and in the photo I also see the roller that my buddy Don Slabicki and I so often used to roll the Kuser tennis court. The article indicates it was full of water which could be drained, but I seem to recall that the Kuser tennis court roller was oil filled. A fascinating page from an era when Hamilton was largely open farm land. 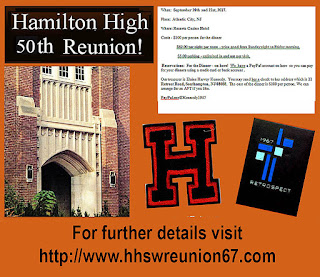 This class can be included in the "Hornet Class with Class!" These folks are going all out with a 50th to remember down in Atlantic City! Further info on the reunion can be found at their website www.hhswreunion67.com. Have a great time, fellow Hornets!

Posted by Tom Glover at 9:45 AM No comments: