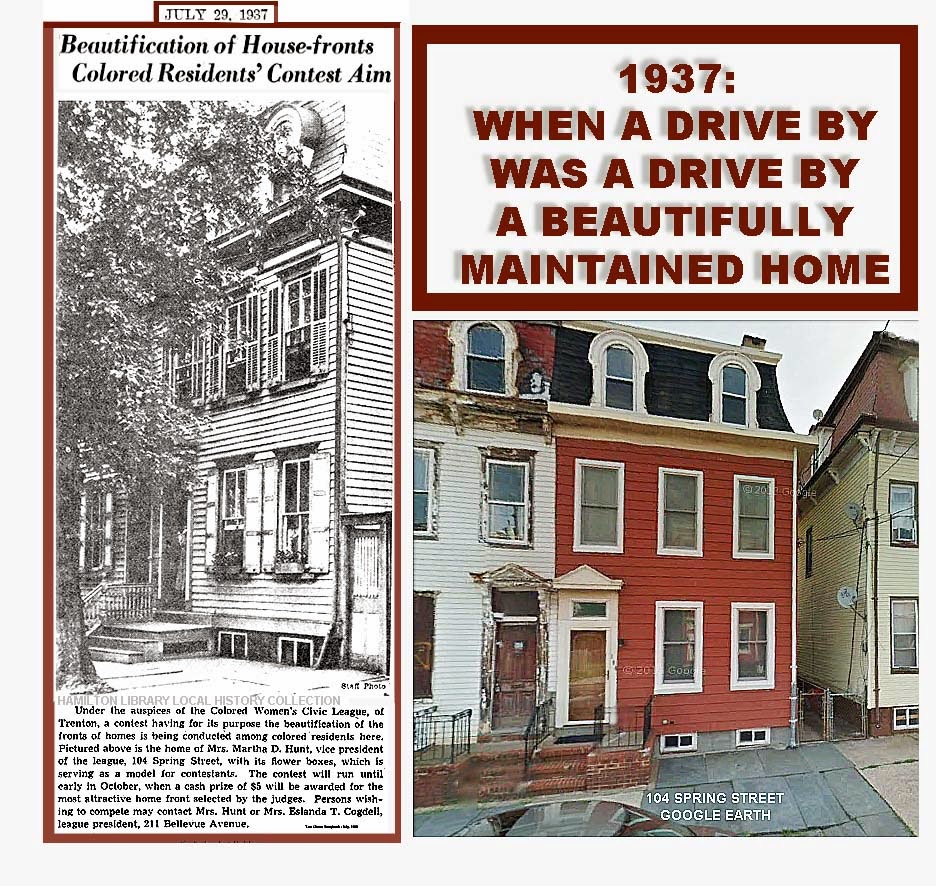 Google Earth has opened a whole new world for those of us who are interested in travelling to locations referred to in old newspaper articles. Such is the case with the graphic herewith that shows the wonderful beautification effort completed by Mrs. Martha Hunt of 104 Spring Street in Trenton. I have modified the Google Earth view and removed the text which was overprinted on the street view. As you can see, 104 Spring Street is much the same as it was structurally, but those charming window shutters are no more, and the wooded gateway to the alley has been replaced by a chain link fence and gate. I really love those sloping Mansard roofs that were so much in evidence in earlier years.
Posted by Tom Glover at 10:23 AM

Tom, I cruise my old neighborhood all the time using Bing & Gogle maps. Unfortunately, our old home on S. Clinton Ave. hasn't faired so well over the years.

We tried to rebuild the home in 1956/1957. As a ten year old I helped pull layers of wallpaper, and break through layers of plaster and lathe to enlarge the rooms a bit and redesign the closets. I helped with the woodwork in the kitchen, mainly by sanding (my Dad's least favorite task).

Out back, our garage was undersized for modern vehicles, so we added about three feet to the front along with a new sliding door.

Now, Bing Maps allows you to drive down Hagerty Alley to see the effects of 58 years of "progress."
St. Stephen's Church is no longer. The sliding door we installed is still there, but with grafiti and warning signs. What may have been the old bath-tub we installed is sitting out in the alley.

Almost all of what I remember has become a complete mess. A pity as to what Trenton has become.

Great stuff as always Mr. Glover,
I've always been interested in the history of my home town of Trenton, and in more recent years, of my "new" home town (of 27 years) Hamilton. Thank you for this great site! Joe P.