THE DOUGLAS DC-3 AND MILITARY C-47 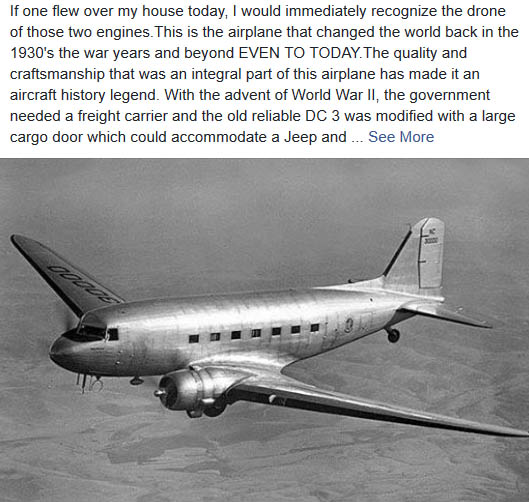 The twin Curtis - Wright R1820 cyclone radial motors have an unmistakable sound signature. Music to the ears of all Airdales. The engines were made up in Patterson, NJ. through the 1960s. They were magic, spitting fire from the exhausts at night. The air cooled engines were also used in tanks and helicopters.

A half century ago these were the backbone of the remaining non-jet Navy. Our carrier was a seaborn base for thirty or more twin engine aircraft. When all were started for a fly-off it was pure symphony.

CALFIRE (formerly California Department of Forestry) flew aircraft with the engines until maybe 10years ago as firebombers. All radial reciprocating aircraft have been retired. The same aircraft flies but are now equipped with turboprop engines. No more roar, they are now a whir and buzz as they fly over.