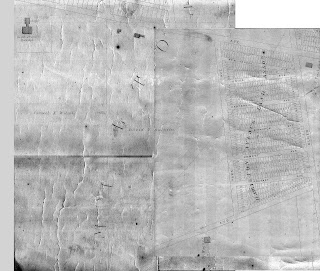 From a huge and very rare "Nol 1882" map that came into my possession, I am learning some very enlightening tings about who was where during the year 1882 in Trenton and a tantalizing glimpse of the Hamilton suburbs including a street map of Greenwood Cemetery. I never knew those many roadways had names.
Here's 1882 showing Villa Park before it became Villa Park and was subdivided between two huge parcels of land owned by Samuel Wilson and David Quintin. The property is shown from Chambers Street on the left of your screen and down to the Olden area community of Bismarck, Centennial Avenues. Mr. Quintin's historically famous race track took up a large part of the property.