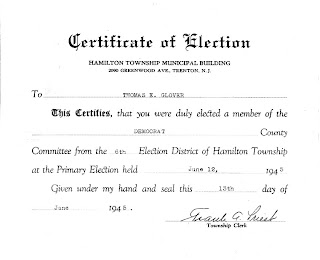 My old man was a dyed in the wool FDR Democrat. He was ecstatic when I told him I was voting for John F. Kennedy in 1960 but he went ballistic when I told him I was voting for Ronald Reagan. When he asked me why I changed, I explained that the new "Woodstock" type Dems were leaning too far to the left wing of the plane, and I felt more comfortable on the right wing, In his best British accent he........well, this is a family website; let's just say he would have voted Democrat regardless of the candidate's political IQ.
Posted by Tom Glover at 4:04 PM